Though the office was closed for a summer vacation this past week, my fellow interns and I have been busy attending teacher training workshops conducting spoken English sessions. We saw a lot of the Tamil Nadu country side traveling to the Eureka school in Vembakkam   and a workshop in Coimbatore. 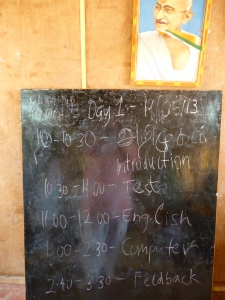 I only went two of the four days because of the long travel time–three hour bus ride to Kancheepuram and then an hour bus ride to the school-and a lack of accommodation, but we were busy the entire day conducting and practicing English with the five teachers who taught at the school. While preparing for this workshop, we were not exactly sure of the level of English proficiency the teachers had especially since Eureka Child had only recently made the decision to switch the schools from a Tamil medium school to an English speaking medium. When we reached the school we realized that the teachers had a basic grasp of the language and we had to start from the basics with sentence structure, simple verb conjugation, and prepositions. For me, since I was able to communicate in both Tamil and English explaining the lesson was easier, however; the best way to practice and strengthen your skills in a foreign language is to be completely immersed in it. Since Marion and Devan did not speak Tamil, it was good for the teachers and headmaster to be put in a situation where they had to speak in English. Though Marion always reminded me to speak in English, sometimes when it got frustrating I ended up explaining in Tamil. Another intern, Mathu, who also spoke Tamil had the same problem of reverting to Tamil when they could not understand.

The first day was a gauge of where the teachers stood in terms of English skills, the second day Marion and Devan prepared an intensive English packet filled with explanations of prepositions, conjugations of simple verbs used in a classroom setting, and various English exercises.  It was a great idea and it really helped the teachers understand what we were talking about. After going through the packet and reviewing what they learned the day before, we went into an arts and crafts session run by yours truly. While I would not call my self the Martha Stewart of Tamil Nadu, I had proficient enough skills from childhood summer camps to make simple crafts that students can enjoy. So started my hour long session on how to make banners from crepe paper, origami crowns and boxes.  Pictured below are the final products of the session.

It was a definitely fulfilling experience, and though there were some rough patches in the beginning we eventually knew what to expect and tailored our lessons accordingly. Hopefully what we learned in Vembakkam will help us when we go to Koovathur to do the same workshop!

The second training we attended was in Coimbatore which is in the Western part of the state and actually about 100 km from the village  my family is originally from. Though it was a long 7 hour train ride, it was definitely worth it to see the city. While I love Chennai the weather is unbelievably hot and the cool breeze in Coimbatore was definitely welcomed.

While the training session in Vembakkam was for teachers at the Eureka School, in Coimbatore we were training the people who were going to train the teachers for the Eureka Superkidz program. We were not exactly sure what we were doing with the Spoken English session but we somehow managed to create a lesson plan in about two hours which included everyone introducing themselves in English, a quick overview of question words and sentence structure, and performing a role-play scenario in English. It was a little bit harder to explain grammar in full detail since we were teaching over 40 trainers at a time, but they were very eager to learn and seemed to understand what we were teaching. The role-play scenarios worked out well despite our initial doubts about the English level of the trainers. With out help they performed short skits in English which was a joy to watch and allowed them to practice their English.

We conducted only two sessions and after each one we had time to explore the center which were staying in. I went to Coimbatore city exploring the shops and eating some delicious Masala Dosai at Ana Poorna’s with some of the other Eureka Child employees. I was also apparently the youngest in the entire organization, many of them surprised to hear that I recently turned 19. Gowri, one of the supervisors had started affectionately referring to me as Pappa-an affectionate term for kids- and worrying about a possible violation of child labor laws. There was a giant white structure which I had fun sliding down on and looking at the beautiful view. I worked hard and I definitely played hard.

I will update with another post with all the pictures I took so look forward to that!